The Role of Nanofiltration in the Pathogen Safety of Biologicals: An Update


Nanofiltration technology to remove possible pathogenic viruses during biopharmaceutical manufacturing was introduced in the biopharmaceutical industry in 1989. The very first industrial implementation took place in the early 1990s, through commercial manufacturing processes of plasma- derived medical products. Then it was applied to recombinant protein medical products, including monoclonal antibodies. In the first review published in 2005 in this journal, the technology was already considered promising and was much welcomed by the industry, but it was still a relatively emerging technology at that time, and many questions were raised about its robustness as a reliable virus-removal tool. We conducted a review to update the published information (SCI journals and suppliers’ documentation) existing on the use of nanofiltration as an industrial process for removing viruses from various biologicals. After almost a decade from the previous review, nanofiltration has established itself as a routine production step in most biopharmaceutical manufacturing. It has become one of the essential manufacturing processes used to assure safety against viral contamination. The technology is applied to manufacturing processes of various biologicals (human plasma products and complex recombinant proteins, such as coagulation factors and monoclonal antibodies made from mammalian cells). Many biologicals that undergo nanofiltration are licensed by regulatory authorities, which illustrates that nanofiltration is recognized as a robust and safe virus-removal method. No adverse events related to the use of nanofiltration have been recorded. New trends in nanofiltration technology continue to appear. As was identified during its introduction to the market and predicted in the previous review, nanofiltration has achieved major technical breakthroughs for ensuring the safety of biologicals, particularly human plasma-derived products, against viruses. 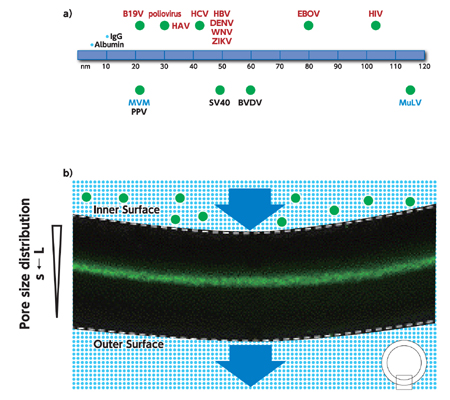