Background: Deep eutectic solvents (DESs) represent a new generation of ionic liquids which are widely promoted as “green solvents”. They are gaining widespread application in materials chemistry and electrochemistry. DESs are defined as eutectic mixtures of quaternary ammonium salt with a hydrogen bond donor in certain molar ratios. Their use as solvents for electrochemical synthesis of conducting polymers could influence the polymer properties and reduce their economic cost.

Methods: The electrochemical polymerization mechanisms during synthesis of polypyrrole (PPy), polyaniline (PANI) and poly(3,4-ethylenedioxythiophene) (PEDOT) using various formulations of DESs are reviewed, as well as their characteristics, mainly from surface morphology view point.

Results: Some general information related to the preparation and characterization of DESs is also presented, followed by an overview of the recent advances in the field of electropolymerization using DESs.

Conclusion: Electropolymerization of conducting polymers involving DESs represents an attractive route of synthesis due to their compositional flexibility which makes possible the preparation of unlimited formulations further influencing the polymer morphology and properties. The use of these inexpensive eutectic mixtures has a large potential to contribute to the development of more sustainable technological processes meeting many of the required features characteristic to the green chemistry. 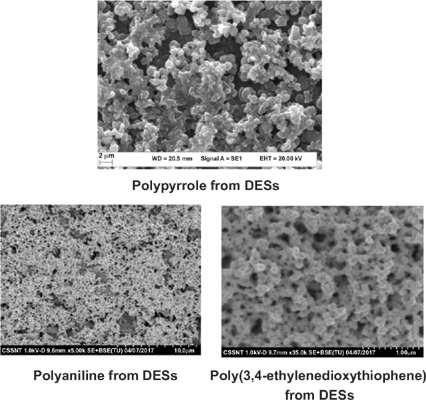