Background: During past two decades, functional nanomaterials have received great attention for many technological applications such as catalysis, energy, environment, medical and sensor due to their unique properties at nanoscale. However, copper oxide nanoparticles (NPs) such as CuO and Cu2O have most widely investigated for many potential applications due to their wide bandgap, high TC, high optical absorption and non-toxic in nature. The physical and chemical properties of CuO and Cu2O NPs are critically depending on their size, morphology and phase purity. Therefore, lots of efforts have been done to prepare phase CuO and Cu2O NPs with different morphology and size.

Results: The phase of NPs was tuned as a function of reducing agents.XRD patterns confirmed the formation of pure phase crystalline CuO and Cu2O NPs. FTIR peak at 621 cm-1 confirmed Cu(I)-O vibrations, while CuO vibrations confirmed by the presence of two peaks at 536 and 586 cm-1. Further investigation was done by Raman, which clearly indicates the presence of peaks at 290, 336, 302 cm-1 and 173, 241 cm-1 for CuO and Cu2O NPs, respectively. The FESEM images revealed rod-like morphology of the CuO NPs while octahedral like shape for Cu2O NPs. The presence of elemental Cu and O in stoichiometric ratios in EDS spectra confirms the formation of both CuO and Cu2O NPs. 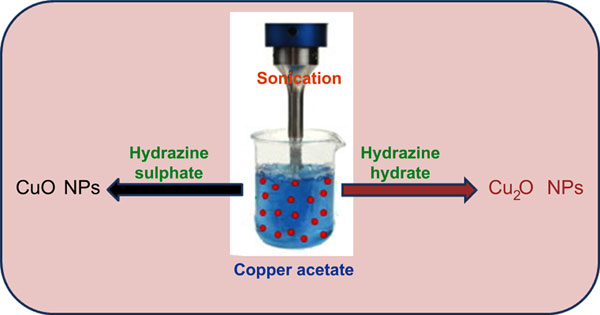