Background: Lovastatin (LOV), a highly lipophilic drug associated with poor oral bioavailability, belongs to the class of cholesterol lowering drugs. With the objective to improve the solubility and to attain sustained release, solid lipid nanoparticles (SLNs) have been formulated.

Result: The particle size and zeta potential of optimized formulation were found to be 169.4±14.1 nm and -24.1 mV, respectively.

Conclusion: The in vitro drug release studies confirmed the sustained release nature of the formulation and revealed that the drug released from the prepared LOV-SLNs is the combination of dissolution, diffusion and erosion. The data obtained from in vitro dissolution study show that LOV-SLNs is a promising colloidal system which could significantly improve the oral bioavailability of LOV by improving the solubility. 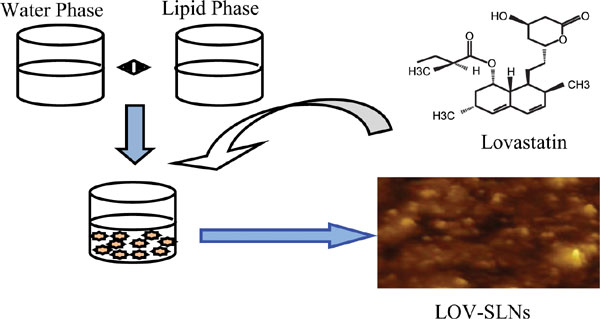